Across Oceans of Time... in a Galaxy Far, Far, Away

November 24, 2020
It has been 11 years. When I talk about discipline, I guess I am speaking to myself.  So, I used to have this theory that the insanity that is happening in the US of A dates back to 1977. Why? And How? Well you see, as a kid, I remember all of my friends playing, we all wanted to be the hero, the Lone Ranger, or Superman, the good guy. Then, in May of 1977 all of that changed. George Lucas turned us all to the dark side. Suddenly no one gave a rats patoot about being the hero, everyone wanted to be Darth Vader. I mean everyone. No one even cared who Luke Skywalker was.  I remember it explicitly. I lived in Bonn, Germany at the time. A New Hope wasn't actually released in Germany until February of 1978, so I had heard about Star Wars, but didn't get to see it until early '78. The following weekend on the playground at recess, everyone wanted to be Darth Vader. I remember it so vividly because we were all running around breathing into the cold air and feeling that being able
Post a Comment
Read more

September 15, 2009
One of my colleagues has just sent me a link to a new blog called ...Pencil Test Depot , a wonderful collection of pencil test animations from some of the greats. If you love animation and would like to see how it is done then click the link above.
2 comments
Read more

September 14, 2009
At long last one of my favorite Robert E. Howard characters will have his own movie, view the trailer here . The film, directed and written by Michael J. Bassett (with help from Howard of course) couldn't get any funding anywhere, dunno why, perhaps the Puritan (omg did he say Puritan?) nature of the Kane character scared off all of the big production studios. So Bassett shot this whole thing on a skeletal budget and mostly out of his own pocket from what I understand, remember that as you watch the trailer. Official release for the US is September 24, 2009 at the Austin Fantastic Fest. As far as I know there isn't going to be a theatrical release, so this means straight to DVD. Damn shame, but this movie should be fun!
Post a Comment
Read more

September 14, 2009
Kanye, "waaaah haaaa haaaa waaaah" West shows us once more that he hasn't progressed past being a pre-pubescent 10 year old girl. I would post the video of Kanye being an ass to Taylor Swift at the VMAs but Viacom has pulled it under "copyright" violation law... or is it to protect an idiot from his own mouth?
1 comment
Read more

April 27, 2009
Our newest addition was baptized yesterday. Penelope (Pippa) Aiofe. She was awesome, as were her mother, siblings, family and friends.
2 comments
Read more 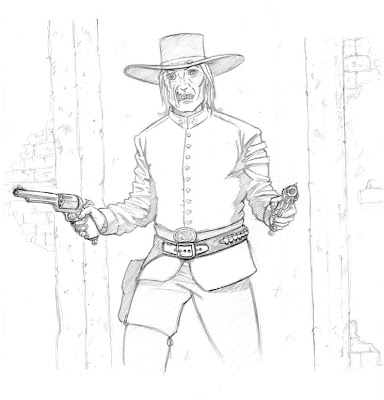 After waiting until the last minute here is my stab at Jonah Hex, one of the coolest bounty hunters ever.
2 comments
Read more

!Some Posts With Artwork! 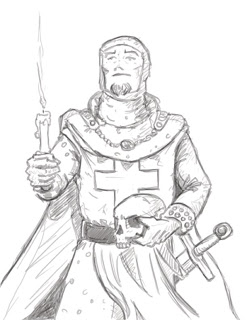 Here we go, I finally post some work. Thanks to a whole bunch of people who have helped get me back in the saddle. I am working on getting a comfort level with my new tablet here, for some darned reason Wacom does not have a compatible driver with my old intuos tablet which saddens me greatly. These are sketches for the main character of a story I have been writing about the Templars.
3 comments
Read more
More posts

Irishbison078
Feo, Fuerte y Formal... ok so I pirated that one, but it is true. I went to graduate school for Sequential Art, a huge departure from my undergraduate study of Psychology. While I have worked in the production industry professionally, God has really called me to be a teacher. I have been teaching at the college level for almost 20 years now. I find that, as much as I love working on a commercial, film, animation, or illustration, I love seeing my children and students grasp a concept, make it their own, and run with it.